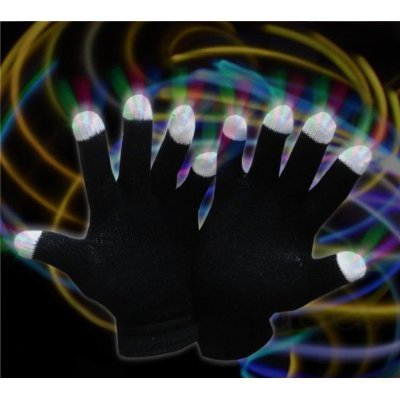 Imagine being able to hold 30 high intensity LED micro lights in the palm of your hands and still be able to rave… Sounds impossible right? What if we told you you CAN have the power and effect of 15 photon style multicolor leds in each hand and still be able to use Glow Stick, club toys or other rave gear with ZERO loss of ability… Enter the Realm of Ghost Raver Multicolor LED Lightshow Gloves; The only light show rave gloves on the market that gives you the power of 30 LEDs per pair with out sacrificing mobility, dexterity or comfort. Each pair of Ghost Raver Gloves allow you to create a fully customizable light show while still having the ability to use your hands freely, so feel free to dance, rave or viva la vida as usual. Simple one touch operation allows you to change modes and effects on the fly for a unique, ever changing light show limited only by your skill and imagination. Ghost Raver Light Show gloves feature 6 incredible light show modes, each of which creates different effects when in motion. These Modes include: 3D Time Warp, Million Color Phase, Multi Color Steady, Blinking Red, Blinking Blue & Blinking Green. The patterns and modes can be changes at any time and each glove works independently so each of your hands can display a different mode at the same time. Ghost raver gloves are the first Rave Gloves on the market to feature a black glove body that seemingly disappears in the dark so all the light and effect occurs at the tip of the glove. Since the glove is black it is far less apparent while performing so the light at your finger tips appear to float in mid air…. an eerie yet incredible illusion that makes these gloves stand out in the crowd. The black portion of the glove appears hidden while in use where as the white tips of the gloves EXPLODE with a light and color light show that is an incredible sight.

the truth about these gloves Here’s the deal: these are great for first-time LED glove users. You can’t beat the price, and they are not bulky which makes it much easier to learn and practice light shows than with professional-style gloves. These were my first LED gloves and I have a major attachment to them! You must be very gentle with them because the wires are very fine and once they break, they can’t really be fixed.My gloves lasted through 3-4 very long shows/festivals before they started to go, but I…