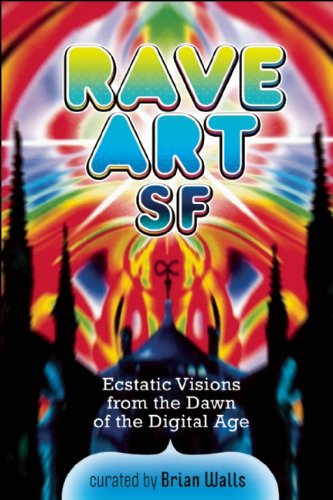 Rave Art: Ecstatic Visions from the Dawn of the Digital Age

Rave culture has influenced music, fashion, and art since its beginnings in the early ’90s. Evolving from the UK warehouse party scene in the ’80s, raves were underground all-night parties. A rave would last all night, with different DJs spinning techno or house music—anything with fast driving beats that kept people dancing until morning. Experimentation with different drugs, the most popular being Ecstasy, was socially accepted and usually encouraged. A room of people dancing and stomping to the same beat all night would transform individuals into a single organism, a single fluid movement.

Rave Art SF reveals the unique cross-pollination of innovative design emerging from Silicon Valley’s backyard at the dawn of the digital age with the bastard son of San Francisco’s famous psychedelic music scene. Containing dozens of images from free flyers that promoted ephemeral events, Rave Art SF colorfully documents a time and place on the cusp of Internet communication’s widespread adoption, in a celebration of printed creativity.

Graphic artist Brian Walls has been creating rave flyers since the San Francisco scene began in the 1980s. His design skills have been put to use by the San Francisco Museum of Modern Art, Apple computers, and SKYY vodka, among other organizations. He lives in Oakland, California.